Get Tickets for inside] out Gala
PhotoVoice 2016 Our upcoming “Untold Minds” showcase is part of the inside] out Art Exhibition on September 29 – October 1, 2016 at the James Kelly Contemporary in the Santa Fe Railyard Arts District. Participant artists will complete their pieces for “Untold Minds” by September. At that time we will post the new images and stories at www.insideoutsantafe.org PhotoVoice 2015 “Untold Minds” was part of the inside] out Art Exhibition, which provides a professional forum for the artwork of individuals living with mental illness. The Exhibition took place at the James Kelly Contemporary and Tai Modern galleries in the Santa Fe Railyard Arts District during Mental Illness Awareness Week on October 9 and 10 and was open to the general public. There were ten PhotoVoice participants from Santa Fe and Albuquerque. Each participant worked with a mentor who wanted to engage others in expressing themselves through the art of photography and storytelling. Eight pieces sold. We are excited to announce that the 2015 “Untold Minds” is also part of an upcoming show at Tortuga Gallery in Albuquerque from May 8-May15, 2016, “Art Groove: Free Your Mind and Shine.” To see more "Untold Minds" pieces, visit www.insideoutsantafe.org PhotoVoice 2014 In 2014, PhotoVoice was part of the larger inside] out Art Exhibition at the James Kelly Contemporary Gallery in the Santa Fe Railyard Arts District. It was the first exhibit of its kind in Santa Fe and it was named "Untold Minds." Five individuals from Casa Milagro, a very special residential community for adults living with mental illness in Santa Fe participated. Five of the ten PhotoVoice pieces sold. 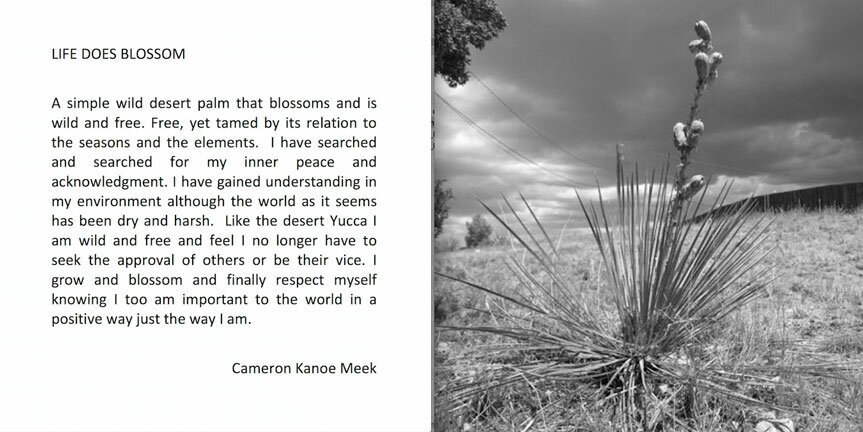